" A consideration in its widest sense is the reason, motive, or inducement, by which a man is moved to bind himself by an agreement. It is not for nothing that he consents to impose an obligation upon himself, or to abandon or transfer a right. It is in consideration of such and such a fact that he agrees to bear new burdens or to forgo the benefits which the law already allows him." John Salmond, "Jurisprudence 359 ( Glanville  L.Williams ed.,10th ed. 1947 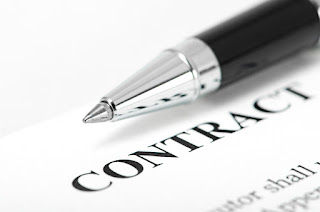 a written contract is usually a written document that explicitly, i.e. clearly sets out the rights and obligations of the parties, along with remedies that may be applied if one party breaches the contract.

that implied contract was concluded by the conduct of the parties, with no oral or written form.
author mirellium o 04:56 Brak komentarzy:

mirellium
Stary Sącz, Malopolska, Poland
Finding something unprecedented each and every time I open my eyes. My happiness is the fruit of the interior peace within me every day******* Witajcie na www. mirellium.blogspot.com, mam nadzieję, że nie będziecie znudzeni, ani sami bierni.